Previous Next
Oswestry charity gets ready for running festival fun

Hundreds of runners are preparing to raise thousands of pounds for an Oswestry charity at this year’s running festival.

The Brynkinalt Running Festival in Chirk will see runners take on scenic, off-road cross country style routes around the Brynkinalt Estate covering 5km, 10km or 20km on May 8th.

The event, which is set to attract youngsters as young as 12 up to veteran runners and any ages in between, is run by Adrenaline Sporting Events which has chosen The Movement Centre in Oswestry as the charity partner for this festival.

Runners from across the region have already signed up for the event and some of the free running places for The Movement Centre have already been snapped up.

Curtis Langley, marketing and fundraising manager at The Movement Centre which offers Targeted Training therapy for children with movement problems, said: “More than 70 million people in the UK went running at least twice in the last 28 days which is just brilliant.

“We see families out running together, children enjoying cross country events at school, junior Park Runs before their parents take part in the full Park Runs.

“Running has so many physical and mental health benefits and the Brynkinalt Running Festival is a perfect chance to run with family and friends and of course run a distance which suits you.

“We would like to thank Alan at Adrenaline for once again choosing our charity as the nominated charity for this fantastic event and also thank Sue Trevor for kindly opening us her estate for this event.

“This event is for all the family, and is not just about winning, but about new experiences and an opportunity for young runners to take on their parents, siblings or grandparents and have fun out in the fresh air.”

Despite the pandemic in 2021 the event was a huge success with 300 runners taking part, including Welsh Athletics runner Andy Davies, who stole the crown in the 20k run, finishing in 1 hour 17 minutes.

Andy, who will be representing Wales in this year’s Commonwealth Games said: “I had a fantastic experience at Brynkinalt last year. The organisation was spot on and what a location for it to be held! The course was well marked around the stunning countryside and the marshalls were excellent and very encouraging. I will certainly be going back again this year.”

Tim Viner, who raced with his family in last year’s event said: “My son Rhys, who is 12, and I attended last year’s festival where I ran all three distances while he wanted to have a real crack at his first competitive race outside of a school setting.

“Rhys smashed his 5K finishing 3rd male – a podium in his first ever race. I then raced the 10k, a slightly shorter distance than I am used to but the energy of the day pushed me to race it hard.

“The final stage of the day was the 20k which I ran with my sister Cathy for whom it was her longest race to date. We had such a great family day amongst friends and can’t wait for the 2022 festival.”

To apply for a free running place to represent The Movement Centre, whereby you do not have to raise a minimum amount of money, email curtis@themovementcentre.co.uk. 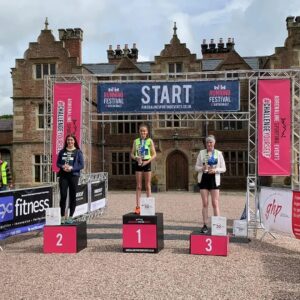