It was a long time coming but The Rotary Club of Oswestry held their 93rd Charter Night at The Wynnstay Hotel last Friday making up for their 2 year’s of inactivity by inviting a terrific group of speakers to share the evening with them.

Not even the absence of the Club’s President David Griggs, technically the host for the evening though absent through a family Covid event, could dampen the excitement caused by Helen Morgan MP, recently elected to the North Shropshire constituency, Rotary District Governor Nick Gidney all the way from Anglesey and Cllr Jay Moore, Oswestry’s youngest Mayor in recent times, who were present to address the Club.

Stepping in for the President at the last minute, the Club’s President Elect Joanna Banks, welcomed the speakers and guests whilst the Master of Ceremonies was David Davies, the Club’s Treasurer.

Nick Gidney reminded the Rotarian audience of why the Rotary Foundation had been founded back in 1917 to fuel all the works that Rotary organisations carry out; their main project, in partnership with the World Health Organisation and the Bill and Melinda Gates Foundation, has been to raise funds to be on the verge of eradicating Polio from the world through a worldwide vaccination programme.

With pleasure, Nick then presented Oswestry Club member Mark Liquorish with a Paul Harris Fellowship to recognise the contribution that Mark makes to the life of his Club.

Helen Morgan, supported as ever by the presence of her husband, spoke to the audience: “Oswestry Rotary Club is an important part of the town’s community, and it’s a real privilege to be able to speak at a celebration of 90 years’ work for some great local, national and international causes.

“Rotary’s support and fundraising on Ukraine, during Covid, and for our local foodbank shows Oswestry at its very best and shows how voluntary action locally can provide real support for thousands.”

Picking up on their local focus, Jay Moore went on to challenge Oswestry’s three Rotary Clubs to work together to support his Mayoral Charity to help establish a fund to support those who wish to tackle mental health issues in the younger generations who, among other things, have been so badly affected by Covid.

President Elect Joanna Banks has something to work towards in the next Rotary year! 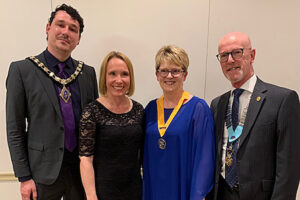 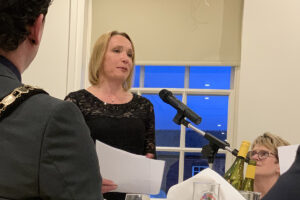 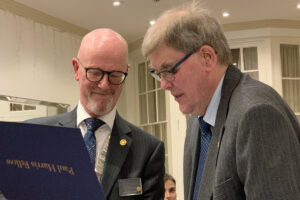 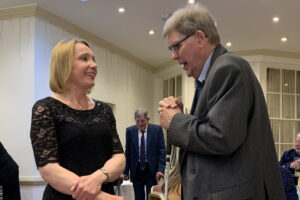