Parkinson’s in the Marches

Previous Next
Parkinson’s in the Marches

Parkinson’s in the Marches (PIMs), set up by Simon Jackson and Elaine Payne to support the Parkinson’s community in the local area, held its inaugural event at the Wynnstay Hotel in Oswestry.

Thirty-five people with Parkinson’s attended and with carers, helpers and speakers added, over 80 people shared the day. It started with a speech therapist getting delegates to shout out, a way of helping with speech strength loss experienced with Parkinson’s. This was followed by a talk by Marie Haywood and Jodie Lloyd, two local Parkinson’s nurses who explained the services they can offer and the latest changes to the service in Shropshire. Then Louise Idoux from the Herbarium in Oswestry spoke about herbal options for dealing with Parkinson’s symptoms focused particularly on the benefits of CBD oils.

There was then a talk by Michelle Simmonds of Lanyon Bowdler Solicitors about the importance of Lasting Powers of Attorney for financial affairs and health and welfare to help people with Parkinson’s have a settled basis for dealing with their affairs as the condition progresses.

Over lunch there was a chance for delegates to share experiences, and for a stirring rendition of Elaine’s song about the Parkinson’s experience to the tune of ‘Men of Harlech’ after a very short rehearsal time!

In the afternoon Jamie Jenkins (a former dancer) of Coleg Cambria in Wrexham had everyone on their feet practising dance moves designed to help people with Parkinson’s maintain mobility. This was followed by a talk by Gaynor Edwards about the under-publicised problem of early onset of Parkinson’s, in her case in her thirties. Finally, Gareth Hughes of Home Instead, a local care provider specialising in providing care in the home, talked about care of Parkinson’s sufferers in the light of his own experience of his father’s journey with the condition.

Every speaker was well-received and gave helpful insights to people with Parkinson’s and their carers into aspects of living with the condition.

But as well as listening to the speakers, it was a wonderful opportunity for a large group of people with a common problem to get together and share experiences in a way that has been so difficult for the last 18 months. The event generated a great atmosphere and feedback from all present including the Parkinson’s nurses and the local representative of Parkinson’s UK was universally positive.

The inspiration for the day was Elaine Payne, who is herself on the Parkinson’s journey and the day was a great reward for her vision. PIMs are delighted that they have been nominated as the home charity for the Trefonen Hill Walk Weekend, this year being held over the August Bank Holiday Weekend. This will provide funds for future initiatives by PIMs to support the local community of people with Parkinson’s.

It is great news that the local support group, Friends of Parkies, will be meeting in person again with a meeting at the St Martin’s Village Centre on 11 August and then monthly on the second Wednesday each month.

For further information on Friends of Parkies contact Phil Bowen on 07840852315. 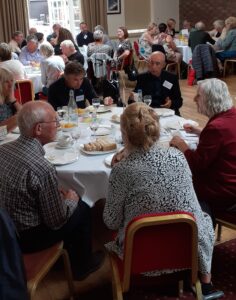 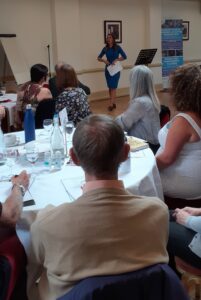