“Probably the best school trip ever!”

Previous Next
“Probably the best school trip ever!”

Developed by the Club on the Crucial Crew model to help young people wise-up to the dangers around them as they prepare to move up to secondary school, LifeLine delivers its messages through 10 short, sharp scenarios presented by organisations such as the Police, Coastguard, Railway Police and Fire services, St John Ambulance and the National Farmers Union together with members of the Club who write and present speed awareness, internet safety, bicycle safety and anti-bullying scenarios themselves.

During the week, over 500 pupils from 27 schools attended for their half day experience, either morning or afternoon, arriving in teams ready to move round the scenarios and win marks from Rotary members for their attentiveness, engagement and understanding of the subjects with winning teams receiving medals.

Any rustiness soon wore off with the youngsters entering into the spirit of the event, testing their awareness and knowledge in front of Friday’s guests, Oswestry Mayor Councillor Jay Moore, Rotary District Governor Paul Dutton and President of Oswestry’s Cambrian Rotary Club Roger Whitting.

Rtn Joanna Banks, President of the Rotary Club of Oswestry said: “We are so pleased to be back in business with this event after a two year absence due to Covid. It is hugely rewarding to see the enthusiasm of these youngsters as they learn vital life lessons.

“Thanks to all the people who have helped us deliver our messages this week.”

Overheard as pupils boarded their homeward bus: “That was the best school trip ever!” made all the Rotarians’ efforts to revive the event worthwhile! 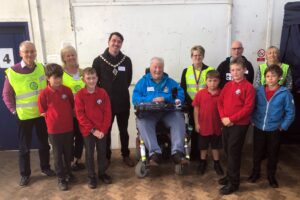 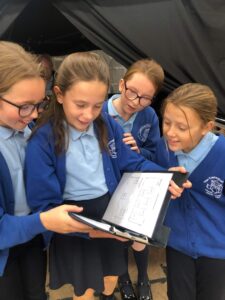