A county charity manager has been crowned Fundraiser of the Year at a regional awards ceremony this week.

Helen Knight, Head of Fundraising for Lingen Davies Cancer Fund, was nominated for the honour as part of the Chartered Institute of Fundraising’s Midlands’ Conference, held in Birmingham on Wednesday.

Helen has worked for the cancer charity for more than two years after initially being appointed to the role of Development Manager. Her work has involved generating new income streams for the charity, growing its corporate supporter base, and introducing new events for supporters.

The nomination submitted by her colleagues and read out to the guests at this year’s conference said Helen had been instrumental in helping Lingen Davies reach the £1,000,000 income mark. It referenced her ‘tenacious attitude’ and ‘dedication to enhancing services and support for local cancer patients’.

Naomi Atkin, CEO of Lingen Davies, said: “Helen has had a tremendous impact on the charity and has formed a fundraising team of passionate, driven and talented individuals. This recognition is very well deserved, congratulations Helen.”

Helen Knight said: “I am so honoured to have been nominated for this award and to be working alongside such a fabulous team. We are all dedicated to ensuring the very best cancer services and support are available locally for patients throughout Shropshire and Mid Wales.

“Working in fundraising is an absolute privilege,” she added.

Lingen Davies Cancer Fund works to raise awareness about cancer in the community, help people recognise the signs and symptoms of cancer, and funds projects to benefit those living with and beyond cancer.

For more information on the work of the charity visit the website www.lingendavies.co.uk 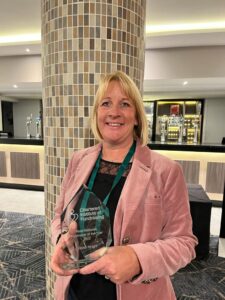