The Ironworks gets approval from Kennel Club to host Dog Show

The British Ironwork Centre is a firm believer of bringing dogs along for an adventure with the whole family. With their own private entranceway, complimentary dog bags and Bonio biscuit on arrival, the site has three dog friendly routes around the site, which includes dog waste bins and water stations. So, when Marketing Manager and Secretary of the German Wirehaired Pointer Club, Alice Turnbull, asked to hold their Breed Club Open Show on site, it was an obvious choice to say yes.

As part of the Community Support Programme, the German Wirehaired Pointer Club will be using the grounds and facilities to host their Breed Open Show on the 11th July.  Chosen over other well established show grounds across the country, Chairman Clive Knowles said, ‘it was an absolute honour and privilege to host and support this numerically small breed’.

As a Kennel Club licensed event, the Club Show will draw in over 50 of the top winning German Wirehaired Pointers around the UK to compete for the title of Best in Show under judge Mr Tom Mather.  This will be the first Club held event since the pandemic and since last seeing each other at Crufts, March 2020.

The German Wirehaired Pointer (GWP), is a medium sized hunting, pointing and retrieving Gundog which has a wire haired coat, hence the name. Originating from Germany, the GWP Club was formed in 1976 and will celebrate their 45th anniversary in September. If you are interested in learning more about the breed or simply want to understand more about dog showing, please come along to the event. 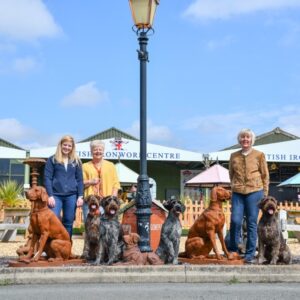