A local man is being cheered on by work colleagues, family and friends to perform one thousand press-ups during May to raise much needed funds and public awareness for Motor Neurone Disease (MND).

Ant Watkin, who works for law firm, GHP Legal, is hoping that sponsorship through his Facebook page will bring in £1000 to help families affected by MND, ahead of Motor Neurone Disease Awareness Month which takes place globally every June.

MND is a rare and cruel condition which attacks the upper and lower motor neurones that transmit electrical nerve impulses and carry information from one part of the body to another. Degeneration of the motor neurones leads to weakness and muscle wasting, increasing loss of mobility, and difficulties with speech, swallowing and breathing.

The disease affects around two in every 100,000 people in the UK each year. Life expectancy after diagnosis is one to five years, and just 10 per cent of people with MND live for 10 years or more.

Ant decided to take on his challenge to complete 1000 press-ups in memory of his father-in-law, who lost his life to the terrible disease in 2017. All donations will go to

Motor Neurone Disease Association (MNDA), a group formed in 1979 by volunteers who wanted to offer support and advice to those affected by the illness.

“MND mainly affects people in their 60s and 70s”, says Ant, “but it can affect adults of all ages. About 5,000 people are living with MND in the UK today, but with no cure and long-term survival rates so low, there is a limited window in which to study why it develops and how it progresses.

“The MNDA needs every pound it can get, particularly in the current climate when every charity in the land is suffering from cash starvation. The charity works to support families of MND victims and help improve their lives, whilst at the same time carrying out research into who and how many the disease affects, and why, and developing treatments to reduce the impact on sufferers’ daily lives.

“I am well on target to complete 1000 press-ups in May; in fact, I may even get there by this coming weekend. Now I need to reach my target of £1000 in donations. By special request from donors, I have been doing some of the press-ups in strange places. If you visit my Facebook page you may recognise some of them, and you can help me reach my donations target at the same time! Thank you.” 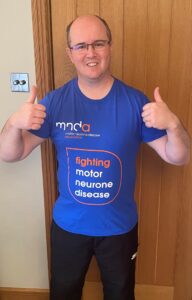