Book your place in the Oswestry Christmas Parade now

Previous Next
Book your place in the Oswestry Christmas Parade now

Planning for the Oswestry Christmas Parade on Saturday 3rd December is a year-round enterprise, but when the leaves turn from green to brown, it’s time for everyone to start getting involved and preparing for their part in the festivities.

Jonathan Jones, who organises the parade on behalf of Borderland Rotary Club said, “There have been lots of meeting behind the scenes to get the route sorted, the roads closed so that the parade, which brings joy to so many, can go ahead and if you wish to be a part of this great endeavour, step forward and book your space. We’ve seen the parade grow and grow over the years and even Covid didn’t stop it, in fact, I think it came back stronger and let’s hope it can, once again, cheer Oswestry and get everyone in the mood for Christmas.”

Research suggests that the first parade was held way back in 1954 and although organised by the Round Table Club, the Army was an integral part providing not one, but two military bands which were based at nearby Park Hall military camp. The parade continued when the army left town but by the late 90’s it seemed to be going downhill but luckily Borderland Rotary stepped in and it has seen a steady growth over the last twenty years. Long may it continue.

Jonathan continued, “So put the 3rd December in your diary and If you want information about entering the parade, please contact me on jonathanmjones5@gmail.com and we can get together to put loads of smiles on loads of faces!”. 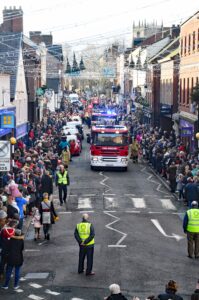