A Play Specialist from The Robert Jones and Agnes Hunt Orthopaedic Hospital has been announced December’s winner of the Health Hero Award after being nominated by the Chief Executive.

Polly Brown, who works on Alice Ward, the dedicated children’s ward at the Oswestry-based hospital, was nominated by Stacey Keegan, Interim Chief Executive, after Stacey had received an email from a child’s parents, who described Polly as being “brilliant from the outset”.

Mike and Fabiana Denley, parents of 9-year-old Thomas, praised Polly after recently visiting the hospital for an MRI scan.

They said: “As we lived some distance away, Polly sent through a range of literature and videos on how to prepare a child for an MRI and some play related strategies.

“On the day, she was there to greet us and help put Thomas at his ease. She accompanied us into the scan and was so supportive all the way through. She then had a laminated certificate to present to him, together with a small gift which really made Thomas smile at the end of a very difficult day. She then even followed up with an email to check he was okay.”

The monthly award is presented to unsung heroes from across the hospital who are nominated by their colleagues for going the extra mile.

Polly said: “My job can be difficult; however, it is truly rewarding when a child is able to overcome challenges and receive the treatment they need.”

“I feel overwhelmed to have won Health Hero, it really is lovely to receive recognition from parents and Stacey.”

She was presented her award, consisting of a keepsake certificate, special badge and box of chocolates donated by the League of Friends, by Stacey.

Stacey said: “It was the highlight of my day when I received the email from Thomas’s parents explaining how incredible Polly had been throughout his MRI scan.

“I instantly thought of our Health Hero Award and I am delighted to announce her as December’s winner.” 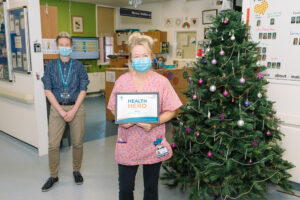