Chinese groups and coach organisers are returning to Shropshire in strength, as today saw another group of Chinese visitors travelling through the county. After a day spent at the British Ironwork Centre in Oswestry, the group then travelled on to the aqueduct at Chirk for a boat ride.

Group visits and coach touring operators have generally been badly hit by the pandemic, with colossal quantities of groups cancelling visits. As confidence returns, this industry is back on the move again.

This particular group, known as Wirral Chinese Association (WCA), have travelled from the Liverpool area and was made up of Chinese people who are currently residents and citizens of the UK.

A spokesperson from the British Ironwork Centre said this trip was in the planning for some time and only now has been made possible following the very successful vaccinations programmes.

The British Ironwork Centre are thrilled that groups are returning, and we are even more grateful to see that the amount of future coach and tour enquiries coming through is increasing day by day.

Now that the British Ironwork Centre has a resident member of staff that originates from Shanghai, China, the visit went smoothly, and the group really enjoyed being greeted in fluent mandarin.

A representative from the coach company, Carvers Coaches, said that the facility of a resident Chinese speaker was a great benefit to the trips, and they would be bringing more groups to the British Ironwork Centre soon.

If you would like more information, or would like to book a group visit, please visit https://www.britishironworkcentre.co.uk/ 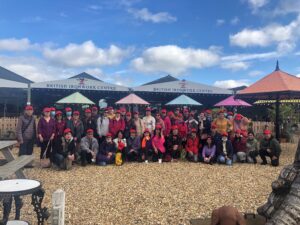