Prior to the pandemic, the Plas Coch campus would host a ‘crime’ played out and investigated on site.

Last year, the event was held entirely online, but with a relaxing of restrictions allowing for students and staff to return on site, the event took place both virtually and on campus.

This year’s event saw students on the Professional Policing course tackle Operation Zodiac, where they were tasked with analysing four suspicious deaths which appeared to have cryptic links to the star signs. Forensic Science students were also involved in the investigations.

With the guidance of DCI Alun Oldfield, who has led many major investigations for North Wales Police, they were able to watch pre-recorded interviews with the suspects as portrayed by Performing Arts students, then discuss associations around each one, forming different hypothesis based on motive, opportunity, and personality,

Andrew Crawford, Professional Policing Lecturer, said he was delighted to see Crime Scene Day return in its hybrid format, and is already looking forward to bringing it fully back to campus next year.

He said: “It was brilliant.

“Crime Scene Day brings together a number of different Degree courses from across the whole University and gives students an immersive learning experience.

“It provides them with an opportunity to have fun whilst putting theory into practice, and breaks down barriers.”

He added: “We are very grateful for the assistance provided by North Wales Police, DCI Alun Oldfield and Lucy Williams from the Crown Prosecution Service.”

Amy Rattenbury, Senior Lecturer in Forensic Science at Wrexham Glyndwr University, said: “The CSI day event is a great opportunity for our final year BSc (Hons) Forensic Science students to get a real appreciation of how their role fits in to a larger investigation.

“The opportunity to work with experienced professionals and to follow a case through from crime scene to court room is great practice for the types of careers they will go in to.”

Elen Mai Nefydd, Programme Leader for Theatre, Television and Performance, said students on the course were delighted to gain practical experience and help out, playing their part in the success of the day.

She said: “For our students, their work and performances as corporate role-play actors, where they build up a situation following a brief from the Professional Policing lecturers, is crucial to the success of the day.

“This year, the students performed monologues to camera and improvised throughout the day as suspects in ‘Operation Zodiac’.

“This enabled our students, through the Active Learning Framework, to prepare, rehearse and perform on campus and a digital platform and to keep the standard set in previous years.

“It was a successful day and a fantastic experience for our actors in training.”

Another feature of the event was the visit of course applicants, and sixth-form students from four local school to take part in the day which benefited all who took part. 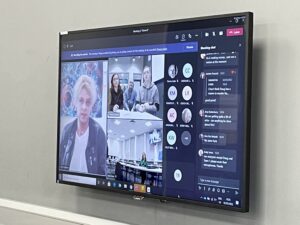 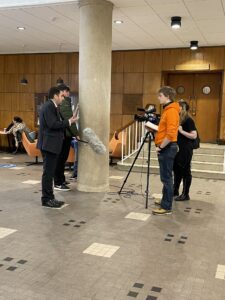 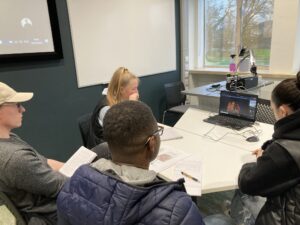