The Mayor of Oswestry Councillor Mark Jones, welcomed guests to the 2022 Civic Dinner at the Wynnstay Hotel on Friday 22nd of April for the annual celebration of community life in Oswestry. 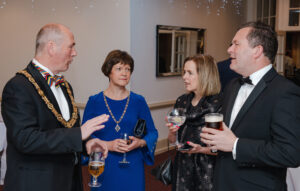 In reflecting on his time in office the Mayor said “The role of Mayor is a privileged position and it is both a joy and a humbling experience to meet the good people of Oswestry. I have wanted this evening to be about Oswestry, its organisations and the community. I can’t name everyone in the room this evening but I would like to thank you all for your endeavours, whether it be an event, supporting businesses, supporting individuals in your community or providing valuable services to those who need them the most. Oswestry is about the collective us.” He concluded by saying “Finally I would like to thank you for the kindness and hospitality that has been shown to me.  This is quite some town we have and one which I am extremely proud to have served as your Mayor.”

Guests of the Mayor were treated to an inspiring talk from Ian Davies and Roy Dixon from the Atlantic Mavericks who rowed the Atlantic, completing the arduous 3,000-mile challenge in 50 days and 19 minutes. In proposing a toast to “facing adversity and challenge” there was a recognition that, as the Mayor explained, “the last twelve months have demonstrated just how resilient this Town and indeed this Council is. I took over as Mayor as we headed out of the covid lockdown.  Looking back it was a strange time to be involved in council business and civic life, and there was a lot of nervousness about the impact of the pandemic and the future ahead. Typically, Oswestry has demonstrated its resilience.” 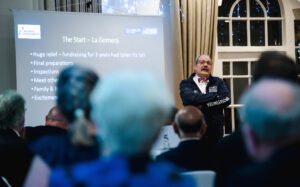 The Special Award for Innovation in Business for 2022 went to a market trader who last year expanded her business with an exciting new addition to the Oswestry Market.  Lucinda Coslett opened a new cocktail bar, named Through The Looking Glass, which has become a huge success. 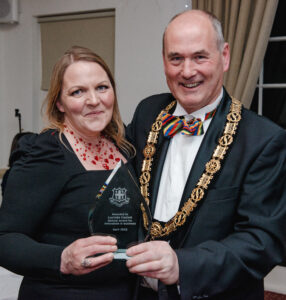 The Outstanding Contribution to the Community is always very difficult to determine with so many people doing wonderful things in the town.  The award went to Jonathan Jones who, has given many of his years working tirelessly as lead organiser for events for the Oswestry community including the Christmas Parade and the Oswestry Town Fireworks and Bonfire Display. 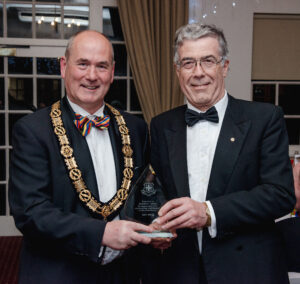 The final award of the evening went to Mark Hignett, curator of Oswestry museum The Mayor said “The Outstanding Contribution to Promoting Oswestry and its Heritage goes to a gentleman who has been curator and founder of Oswestry Town Museum for 10 years.  His enthusiasm and pride for Oswestry heritage and history has filled the museum with items connected to the town’s history from all around Britain. He has encouraged footfall into Oswestry with Heritage Open Day festivals celebrated in September and even has a collection of letters from World War Two which attracted the interest of people regionally, nationally and even the international interest of a Hollywood film producer.” 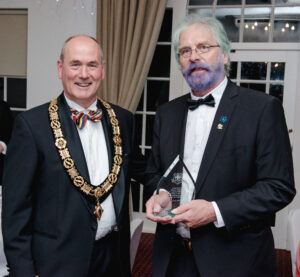 The evening was concluded with Mayor thanking all of those attending for their work and with a raffle which saw over £300 raised for the Mayor’s two charities Oswestry Talking Newspaper and The Motor Neurone Disease Association.