The show must go on, even when Arwen turns out the lights

Previous Next
The show must go on, even when Arwen turns out the lights

One group of students at Moreton Hall was particularly hard hit by the power outage caused by Storm Arwen over the weekend and earlier this week: the cast of Moreton Hall’s senior school production of 9 to 5, the Musical.  The cast was supposed to have a tech rehearsal over the weekend and two internal shows on Monday before opening night, last night at 7pm.  The show, which will be held in The Holroyd Community Theatre, runs through Thursday and is sold out.

“Those final tech rehearsals and soft-openings are really important,” explained Kate Howells, Head of Drama.  “Not only do they allow us to remedy any minor issues before opening night, they also give the cast the confidence that they are ready. ”

When the power went out just before the first internal production was to take place at 1:30pm, the cast did the best they could without lights and a backing track. They sat on the stage, bundled against the cold, and sang.  It was magic.

“The blend of voices would rival any professional group of singers,” said Helen Rayner, Director of Music at Moreton.

Attached you will find a recording of that impromptu performance, a stunning acoustic rendition of Act 1’s closing number, “Shine like the Sun”.

We hope you enjoy it as much as we did.

Moreton Hall, one of the UK’s top independent schools, was recently named Tes Boarding School of the Year.  Located in beautiful north Shropshire, Moreton is an ambitious, joyous and nurturing school, open to girls 3 -18 and boys 3 – 13. 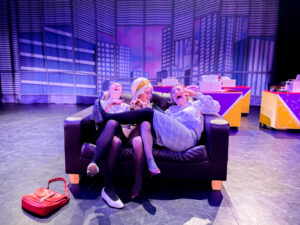